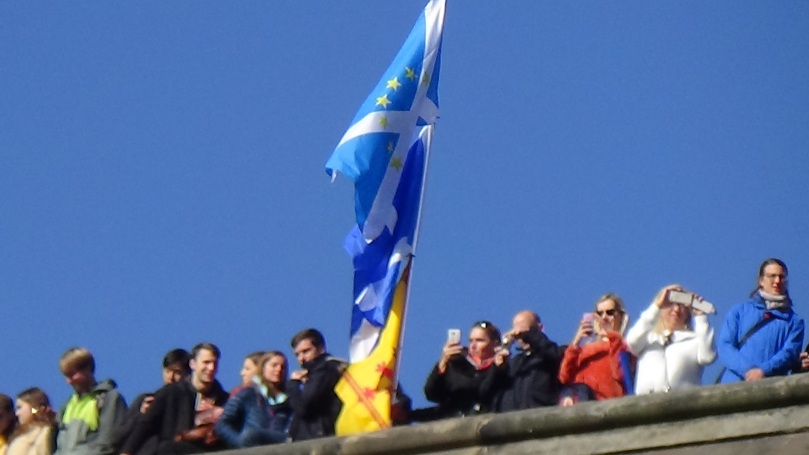 Stiff and sore this morning, oh but it was worth it!

It looked like being a great day even before I set foot on the train judging by those who had travelled to Edinburgh the previous day/evening. The buzz on the Friday of what was to come was very appealing.

I woke to the chill of the morning air but by the time I reached the capital the sun had come out and was beating down on the small crowd below. It was early, only a few of us had gathered by this time. Tourists mingled, eyes agog as they saw more and more people arrive, An American, with his daughters, saltires bought, photos taken’ the wee girls were happy. Saltires blew in the slight breeze and even workmen stopped to watch, smiles on their faces as Johnston Street began to fill up.

After a few photos I got in line, next to the ‘indypram’ blasting out great music, the crowd near me burst into laughter when someone asked if there was a wean in the pram, no, just a sound system and a loudspeaker, very imaginative.

We waited, and waited, and waited, a cheer, we were off; well those at the front were off, we still had another forty or so minutes to wait. I took a few pictures of the castle, and of the tourists all watching, a few saltires had found their way there. Wow, Historical Environmental Scotland must have been having kittens at the sight of saltires everywhere below. They really did disgrace themselves, I would say, I hope they learn from this but alas, I don’t think so, they are the keepers of the castle, hopefully not for much longer.

Another cheer and we were off, well we took a few steps and stopped, another few minutes went by, and then it was all systems go, walking slowly, and it had to be slow, those cobbles could be lethal, thank god I put the correct shoes on. Nothing dampened our spirits as we made a quiet dignified amble down the Royal Mile, those on the pavement all watching, some applauding. And then, the unionists, about ten I think, we just smiled and waved, some blowing kisses; their response, stoney silence, except for the clown in the union jack shirt, giving it laldy. I haven’t the faintest idea what he was saying as he was drowned by all the love.

The blast of a horn and a police motorbike, we got out of the way as a taxi carrying a wedding party passed, oh how we smiled and waved at them,

We reached Holyrood to be greeted by those who had arrived before us, some going straight there, some having just arrived, the sight from Salsbury Crags was amazing, a row of people, saltires flying high at the top, others dotted on the hillside, picnics at the ready. I was glad to finish, my back was breaking as I walked back to the Parliament to find somewhere to sit, I couldn’t sit on the ground, (I’d never have gotten back up again), not with these dodgy knees. With some food inside me I watched the rest file in.

Feeling suitably recovered enough to venture back up the hill towards Waverly I set off, overhearing police estimate that at least 100,000 were there. I haven’t the faintest idea where Edinburgh City Council got 20,000 from, perhaps the (mostly unionist) council are playing down the numbers. There were no official cameras (BBC/STV), least I didn’t see any; therefore the unionist media and politicians can downplay the numbers by quoting Edinburgh City Council  but those of us who were there on the day, know the truth.

The train back towards Glasgow was packed with those who had been at the march, all in good spirits but, like myself knackered. I arrived home, uploaded some photos and went to bed.

Here’s to the next one – next year I think!