Like most in the independence movement I am impatient, chomping at the bit to get going. Like we should have been independent ‘yesterday’ however, I know we must wait until the chaos that is Brexit plays out. Until every opportunity for a favourable outcome has passed. But what if the First Minister does not call a second referendum? What if we have a second referendum on EU membership? What then? 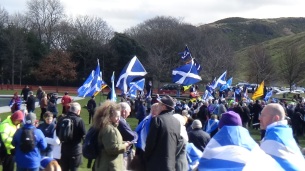 The Prime Minister, is not going to agree to a section 30 order, Westminster are not going to let Scotland go. Not with all that 200 billion we give them each year. What then? Do we just go quietly into the night, or do we fight? And if we fight, then how do we fight?

I am becoming increasingly frustrated with the wait, irritated at what is being done to Scotland and her people. The injustice, the systematic abuse of the most vulnerable, the mere fact that people, whose only crime was to lose their job, or become sick,  will face a bleak Christmas as they move to Universal Credit; the Tory government’s flagship policy which has been an absolute failure. Well when I say failure that is the spin that is put. It has not failed, it is doing what it was designed to do. Remove people from welfare in order that the welfare budget be reduced; until the welfare state is gone completely. And we are taken back to Victorian Times, where the Tories feel most at home. And where the ‘us’ and ‘them’ divide was rampant.

If we are to be an open and inclusive society then Scotland need to dissolve this union, it has never worked, nor will it ever work, as it was never designed that way. It was designed only for the elite, the noblemen of old. And that is how it has been since. The gap between rich and poor has never been wider. The elite with their eyes on the prize. The little wealth accumulated by the lower middle class and once extorted, the elite will move to the middle class. In other words, they want it all. Everything that we have worked hard for, these unscrupulous parasites want. As previously stated; the only thing these individuals value is money and power, and not necessarily in that order.

The people of Scotland must to get away, that said, it will be an uphill task, especially when some are still convinced that Westminster actually care about them. About their business; about their health. They care, not a jot. Time to go and go quickly, perhaps in the New Year, May or June. Or sooner, but no later than June. The longer we wait, the more damage this unscrupulous Tory government and their enablers in the Labour party will do.